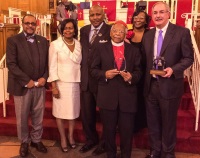 Philadelphia, PA — During its 21st annual MLK celebration on January 17, the Philadelphia Council of Clergy recognized Health Partners Plans’ President and CEO William S. George with the city’s Liberty Bell award, in recognition of his corporate leadership and community involvement. The Liberty Bell award is one of the highest honors from the City of Philadelphia.

Mr. George accepted the award and thanked Archbishop Floyd for the honor, and attributed HPP’s award-winning programs to the hard work and dedication of its more than 800 employees. Mr. George also honored Archbishop Floyd with the Health Partners Plans lifetime achievement award for his commitment to the community.

“Archbishop Floyd serves the most vulnerable and often overlooked populations, ranging from hungry families to people in nursing homes to prison inmates,” said Mr. George. “What he does for others in Philadelphia and beyond through his teaching and mentorship truly embodies Dr. King’s dream.”